skip to main | skip to sidebar

I've Got a Pocketful of Sunshine

There are many things that I've found in my pocket over the years. My phone. My keys. On one glorious day, a $20 bill. I've never found sunshine. Not once. This is partly because I'm not what one would refer to as an eternal optimist. This is also partly because sunshine is intangible light, and hence impossible to keep in one's pocket. However, I'm not here to parse the relative reality of Natasha Bedingfield song titles. I'm here to discuss how I've finally wound up with a "pocketful of sunshine." The quotation marks are there to denote sarcasm.

It seems that recently the Labor Board made a surprise visit to my place of employment in midtown. Now don't get your hopes up; this story sadly doesn't end with my departure from the hotel in a blaze of glory. However, the Labor Board was nice enough to let the Powers That Be know that doling out paychecks every two weeks was illegal, and hence I will now be receiving remittance for my soul every seven days. The Labor Board's flexing it's muscle had an unforeseen and unfortunate consequence for the very employees they were trying to protect: they scared the general manager. And when the GM, who's a useless little hamster if there ever was one, is scared he feels he needs to take action.

"Action" in this case could mean any number of things. For instance, if I was someone in charge of a group of dissatisfied employees who had just had my ass handed to me by the government, I would make an effort to improve working conditions. Perhaps offer an incentive. Buy lunch for the employees. Give people a raise which they haven't received in three years. However, the dirty little hobbit did none of these things. Instead, he had all employees come to one of three inspirational talks that I have no doubt he composed himself in a haze of delusion and self-importance.

I wish I could tell you that I had the forethought to record his ramblings. I didn't. I could try to recreate them here for you, but I don't feel I could even begin to do them justice without the help of a significant amount of mind altering drugs and large influx of douche into my personality.  In essence, he spoke about how he knew that the hotel was going to make it in this struggling economy because of how wonderful all of his employees are.  He pointed out how whenever he went into Duane Reade, he couldn't get the employees to smile at him and he couldn't understand why.  Here's why: the Duane Reade employee is probably working two jobs and struggling to make ends meet and hence isn't interested in making small talk with an over-privileged asshole with all the charm of an unanesthetised limb amputation.  He also told a story about how he "made a cab driver's day" by giving him a $3 tip on a $7 ride.  Allow me to say that I routinely tip that much, and I don't make a six-figure salary...I've also never deluded myself into thinking that I made someone's day by tipping them $3 instead of $1 or $2; I really only do it because I'm too embarrassed to ask for such a paltry sum of money back.

However, all of this is just a lead up to the coup de grâce.  Giving, he explained, was in itself the greatest gift of all for giving makes us feel wonderful.  It was like The Gift of the Magi in midtown.  And then he had the HR Director (who probably would have hung her head in shame if she possessed the slightest shred of intelligence or professionalism) stand up and hand out his gift to us.  Below, you'll find a picture of said gift. 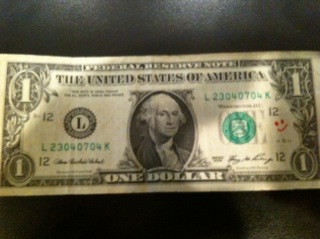 
This magic dollar bill, he informed us, was his gift to us and the act of giving it brought him huge amounts of joy.  So he begged us to keep it safe, not to put it with our other money and look at it whenever we needed a little influx of happiness.  And then, when we were through, he told us to give it to someone else and explain to them the magic of the dollar bill.  We could look forward to a huge rush of joy whenever we chose to pay this magic dollar forward, for (again) the gift of giving is the greatest gift of all.


Where to begin?  First of all, if I get a magic dollar bill it better be the kind of dollar that I can plant in the ground that grows into a tree that sprouts money.  Second of all, I think my one-and-a-half year old nephews would have rolled their eyes and called bullshit at that ridiculousness.  And at least they could have expressed their displeasure by throwing some half-chewed food at that gnome without having people think they were acting out of character.  And finally, this is the way you try to return equilibrium after the Labor Board visits and tears you a new one is to tell a room of adults that you're giving them something MAGICAL?  Is this the Hotel Hogwarts?  If so, I've got a place for him to stick his wand.

Anyway, since then this magical money has been burning a hole in my pocket.  And that's the sunshine in my pocket.  It's the magic of giving.  So wear your sunglasses the next time you see me.  If I open my wallet you might be blinded by the blazing light of bequeathment.  And I'm ending this on that awesome alliteration.
Posted by PC at 4:19 PM